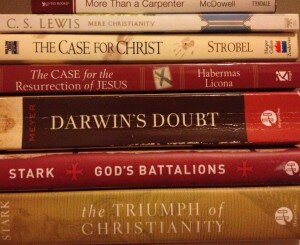 You may be a committed Christian, secure in your faith.  Or, you may be a curious person, open to Christianity, but wondering if there’s really anything to it.  Regardless, you should read the following eight books.

They contain great insights for the curious, while deepening the knowledge of those who already practice the faith.

Of course, this list is not comprehensive, and there are hundreds or thousands of other excellent books that one could read on this topic.  However, I have selected these because I have found them especially helpful for various reasons.  Some are focused on Christian apologetics while others focus on Christian history, theology, or other matters.  Of course, anyone newly interested in Christianity should also read the four gospels (Matthew, Mark, Luke, and John), as well as the book of Acts.

As you read through this list, feel free to provide additional recommendations in the comments section.  Here goes…

The Case for Christ, Lee Strobel – This is the book that awakened my interest in Christian apologetics, and I highly recommend it.  It’s a fast-paced book that covers a lot of ground.  Strobel made his own journey from atheist to Christian, then wrote this book to share the things he learned along the way.  It is presented as a series of interviews with leading New Testament scholars and other experts about the historical, archeological, and other facts that support Christian belief.

More Than a Carpenter, Josh McDowell and Sean McDowell – This is an updated version of a book first written by Josh McDowell in 1977.  At 168 pages, it’s a fairly easy and quick read.  Similar to The Case for Christ, this book was written by a former skeptic who became a Christian, and it offers a range of historical, archeological, logical, and other evidences for the truth of the gospels.  Those who want to dive deeper should check out Josh McDowell’s Evidence that Demands a Verdict and related resources.

The Case for the Resurrection of Jesus, Gary Habermas and Mike Licona – Much like the first two books mentioned above, this book provides a range of historical evidences to support the gospel accounts.  Its primary focus is on Jesus’ resurrection, and it does an admirable job of making its case.  It also provides helpful guidance to Christians who wish to share their faith with others.  Such guidance is needed, as many Christians are rather uncomfortable doing this…or are not very skilled at it.

Mere Christianity, C.S. Lewis – First published in book form in 1952, this one’s a classic.  It’s also short, topping out at 191 pages.  In my opinion, it’s one of the best books available for helping one to understand the basic teachings of Christianity.  Lewis tosses aside the differences between Catholics, the various Protestant denominations, and all other forms of Christianity.  Instead, he focuses on the faith’s core messages, or “mere” Christianity.  This one is highly recommended.

The Triumph of Christianity:  How The Jesus Movement Became The World’s Largest Religion, Rodney Stark – At 418 pages, this one is not a quick read, but it sure feels quick.  This is a fascinating study of early Christian history, and it explores how a tiny, upstart faith came to be the dominant religion throughout the Roman Empire—and beyond—in just a few centuries.  Stark contrasts Christianity with other religions practiced at the time, and he also discusses the critical role of women in advancing the faith.

God’s Battalions:  The Case for the Crusades, Rodney Stark – Another one by Stark, this 248-page book addresses what some consider to be a massive stain on Christian history:  the Crusades.  Many critics of Christianity use the Crusades as a murderous example of Christian imperialism, and as a reason to discount the faith.  Stark paints an altogether different picture of why the Crusades happened, who took part, and what they achieved.  This book provides some much-needed balance on this topic.

Darwin’s Doubt:  The Explosive Origin of Animal Life and the Case for Intelligent Design, Stephen C. Meyer – This book is fantastic.  At 448 pages, many of which are stuffed full of information on genetics, etc., it is not an easy weekend read.  However, it provides an in-depth analysis of Darwin’s theory of evolution, as well as the history of the debate that has swirled around it for more than 150 years.  Meyer does a masterful job of articulating the shortfalls of Darwinian and neo-Darwinian theory, as well as the major variations that have cropped up over the years in an attempt to deal with those shortfalls.  Meyer makes a compelling case for intelligent design (ID), taking care to position ID as a scientific, rather than a religious topic.  Logic & Light will be writing a full review of Darwin’s Doubt in the coming weeks, so stay tuned.

The God Delusion, Richard Dawkins – Yes, I recommend this book, but not because it’s good, insightful, or even entertaining.  In it, Richard Dawkins does his best to convince his readers that religion in general—and Christianity in particular—is irrational, perpetuates ignorance, and is destructive to human development and happiness.  Christians should read his arguments and be prepared to refute them, as Dawkins represents a new breed of “activist” atheist that works proactively to tear down religious faith.  He is a master of the straw-man argument, and his writing reveals either that he is ill-informed, intellectually dishonest, or just so blinded by his hatred of faith that he can’t reason effectively.  It was highly instructive, for example, to contrast Dawkins’ simplistic treatment of the theory of evolution with Meyer’s far more mature and in-depth treatment.  Logic & Light will be writing a full review of The God Delusion in the coming weeks.

Periodically, we’ll share new book lists.  These books can be great resources for committed evangelists and curious seekers alike.  Let us know what books you recommend.

2 thoughts on “8 Books You Should Read”