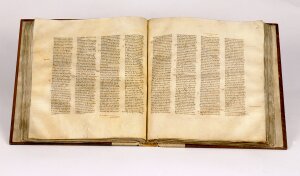 The Codex Sinaiticus, a handwritten Greek manuscript written in the middle of the fourth century. It is the earliest existing complete copy of the New Testament.

“Don’t you know that the New Testament is full of errors?  Over the years, scribes made copy after copy, and introduced so many alterations, errors, and variations that today we can’t even be sure what the original texts said!  In fact, scholars have shown that the surviving manuscripts have around 400,000 variations.  That’s a horrible number, especially considering that the entire New Testament only has about 138,000 words!”

The argument above is made repeatedly by those who want to tear down the New Testament.  Recently, New Testament scholar, Bart Ehrman boosted the argument in his book, Misquoting Jesus:  The Story Behind Who Changed the Bible and Why.  It continues to be repeated, ad infinitum, by anti-Christian bloggers, professors, and others.  So, what’s the truth about it?

First, it might be helpful to read an earlier article in Logic & Light on this topic, Has the New Testament Been Reliably Passed Down to Us?  It provides some important background information regarding the New Testament and the number of ancient Greek manuscripts we currently have in our possession.

To make a long story short, we have about 5,800, written at different times and in different places, which can be used to cross-check one another for accuracy.  That is far more copies than we have for other great works of literature, often by many orders of magnitude.  Having such a wealth of ancient copies available, even if many are fragmentary, provides a wealth of data for scholars to use as they determine the wording of the original texts.

Now, let’s explore this business about 400,000 variations in a document with only 138,000 words.  Remember that a variation is basically defined as a difference from an established standard text, no matter how small or insignificant.  These can be as minor as spelling variations (akin to “flavor” vs. “flavour”) or as major as a total rewrite of a passage.

It is true that about 400,000 textual variations exist, if one counts across all 5,000 ancient texts available to us.  This abundance of ancient texts is a great thing, and it’s that abundance that results in so many variations.  If we only had one or two copies available, then we’d have very few variations.  It’s important to note, however, that these variations do not actually impair our ability to determine what the original text said, or to determine its meaning.

The fact is, the wealth of texts available to us enables scholars to identify and catalog these variations and, contrary to what Bart Ehrman and others like him say, reconstruct the original text with an extremely high degree of confidence.  When you pick up a copy of the New Testament and read it, you’re reading a faithful translation of exactly what the author wrote.

Here is a helpful article on how New Testament textual criticism works.

One thought on “About That Error-Filled New Testament…”