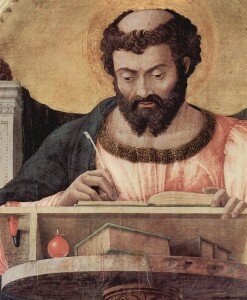 Many anti-Christian commentators argue that the gospels and other New Testament documents, contrary to Church teaching, could not have been written by direct eyewitnesses to the events they describe.  This is because, they argue, Jesus and his disciples were just simple, illiterate, Aramaic-speaking peasants who probably couldn’t write their own names, let alone a Greek gospel account.  The argument is weak, and we have countered it in other articles (here and here).

However, there is another angle to this argument that we should address.  Let’s allow Matthew Ferguson, a Ph.D. hopeful—and activist atheist—from UC-Irvine to lay it out for us:

Yet, from what we know of the biography of John the son of Zebedee, it would (be) rather improbable that he could author such a text.  John was a poor rural peasant from Galilee, who spoke Aramaic.  In an ancient world where literary training was largely restricted to a small fraction of rich, educated elite, we have little reason to suspect that an Aramaic-speaking Galilean peasant could author a complex Greek gospel.  Furthermore, in Acts 4:13, John is even explicitly identified as being ἀγράμματος (“illiterate”), which shows that even evidence within the New Testament itself would not identify such a figure as an author.1

Basically, Ferguson informs us that in Acts 4:13, the Bible itself says that the disciples (at least Peter and John) were illiterate, thereby unwittingly confirming what anti-Christian scholars have been saying all along!  Wow, how devastating to Christianity!  Or is it?

Well, no.  Not only has Ferguson repeated a tired argument about near-total illiteracy that has been blown away by scholar Alan Millard, he has also shown an unwillingness to share the true meaning of the text in Acts 4:13.

Let’s look at the English translation of Acts 4:13 (NIV):

13 When they saw the courage of Peter and John and realized that they were unschooled, ordinary men, they were astonished and they took note that these men had been with Jesus.

The word on which Ferguson has focused is ἀγράμματος, or “agrammatos.”  In the verse above, it is translated as “unschooled,” but Ferguson renders is as “illiterate.”

Let’s turn to some leading scholars to tell us what this really means.  First up is Craig Blomberg, Ph.D. (Distinguished Professor of the New Testament at Denver Seminary):

Elementary education for boys until at least the age of 12 was widely practiced in Israel in Jesus’ day, so texts like Acts 4:13 cannot mean that the disciples had no competence in reading, writing, and memorization (but more likely that they had not gone on to study for the rabbinate).2

Let’s start with the supposed evidence found in Acts 4:13.  This text does not say Peter was illiterate.  It says, and means he was not educated in a school, in this case a school in Jerusalem, so he could be a “grammateus”.  Thus he is called “agrammatoi” which means unlettered.  This is not the same thing as claiming he is illiterate.  What surprises the audience in Acts 4 is not Peter’s handwriting skills, it is his argumentation and use of Scripture.3

Witherington adds the following about the skeptical assertion that the Aramaic-speaking disciples could never have spoken or written in Greek:

The Holy Land had been Hellenized long before the time of Peter, and there were plenty of Jews in both Judea and Galilee who knew at least conversational Greek, which is indeed the language they would have used to talk with centurions and Roman officials of any kind who came around collecting taxes. 4

E. Earle Ellis has for some time maintained that the writing of Jesus traditions and the circulation of such written records among Jesus’ disciples could well have begun already during Jesus’ ministry, while Alan Millard has recently argued this case on the basis of the widespread presence of writing in Jewish Palestine at the time of Jesus.5

So, to sum up:  Ferguson (who is a hyper-skeptical activist atheist) has adopted an overly-simplistic translation of Acts 4:13 in order to “prove” his point.  In the end, he proves nothing except his own bias and his unwillingness to consider the actual meaning of the text.