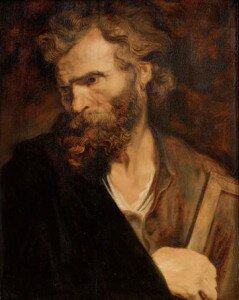 Pretty much everyone knows that Jesus had 12 original disciples.  All three synoptic gospels (Matthew, Mark, and Luke) provide a list of the original 12.  John’s gospel offers no list, but still refers to many of the disciples by name.  The lists of the 12 are highly consistent within the gospels.  However, there is one apparent contradiction that some critics like to highlight.

The Apparent Contradiction and Its Solution

The lists in Matthew (10:2-4) and Mark (3:16-19) each include a disciple named Thaddeus.  In Luke (6:13-16), no Thaddeus is listed.  A disciple named Judas, son of James is listed instead.  The book of Acts (1:13) also omits Thaddeus and includes this person, Judas son of James.  What’s going on, here?  Are Matthew and Mark providing contradictory information to Luke and Acts?  Well, we can’t know for sure, but many scholars have come to the conclusion that Thaddeus and Judas son of James are the same person.

It was not uncommon for Palestinian Jews during the time of Jesus to have two names, with one often being Semitic and the other being Greek.1  Other members of the original 12 went by more than one name, such as Simon (Peter) and, most likely, Matthew (Levi).  It seems likely that Thaddeus and Judas son of James are two names for the same person.  Sean McDowell adds:

Furthermore, Judas son of James needed to be distinguished in some way from Judas Iscariot.  He is referred somewhat awkwardly as “Judas, not Iscariot” in John 14:22, yet it seems unlikely this was his usual designation.2

Given the information above, it appears that there is no contradiction at all.

In John 1: 45-52, we learn of a disciple named Nathanael.  Yet, no Nathanael is listed in any of the synoptic gospels’ disciple lists.  Who is this person?

Critics who latch onto the lists of the disciples and use them as evidence of contradiction are barking up the wrong tree.  Given that people often used more than one name in that place and time, we have very compelling reasons to conclude that the differences or “contradictions” are simply related to that fact. These are the types of differences one would expect to find in independent accounts.