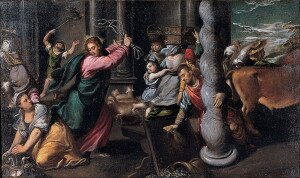 The gospels relate a key event in which Jesus cleansed the Jewish temple in Jerusalem, kicking out the money changers and merchants who he felt were defiling that sacred place.  In the synoptic gospels (Matthew 21, Mark 11, and Luke 19), this event is portrayed as taking place at the end of Jesus’ ministry, shortly before his crucifixion.

However, John’s gospel (chapter 2) tells us that this event took place at the beginning of Jesus’ ministry.  Critics cite this as an example of contradiction between the gospels, and assert that it demonstrates the gospels’ unreliability as historical documents.

The Gospel of Mark indicates that it was in the last week of his life that Jesus “cleansed the Temple” by overturning the tables of the money changers and saying, “This is to be a house of prayer…but you have made it a den of thieves” (Mark 11), whereas according to John this happened at the very beginning of Jesus’ ministry (John 2). Some readers have thought that Jesus must have cleansed the temple twice, once at the beginning of his ministry and once at the end. But that would mean that neither Mark nor John tells the ‘true’ story, since in both accounts he cleanses the temple only once. Moreover, is this reconciliation of the two accounts historically plausible? If Jesus made a disruption in the temple at the beginning of his ministry, why wasn’t he arrested by the authorities then? 1

Professor Ehrman confidently claims that, if Jesus actually cleansed the temple twice, then neither John nor Mark (nor the other synoptic gospels) are telling the “true” story.  He also doesn’t think it plausible that Jesus could have gotten away with such an act early in his ministry without being arrested.  There are some problems with Ehrman’s position.

First, no gospel was ever intended to be a complete account detailing everything Jesus said or did during his ministry.  No person has ever asserted that any gospel contains every event and every detail.  Any time a writer creates a historical document, he or she will focus on the people, events, and details that they deem most important or that they were able to perceive from their perspective, or their witnesses’ perspectives.

Anytime you compare two or more historical accounts of anything, you are bound to find some things emphasized in one that are de-emphasized or omitted from another.  No gospel is exhaustive.  John’s gospel makes this very point, instructively (but hyperbolically) saying that “Jesus did many other things as well. If every one of them were written down, I suppose that even the whole world would not have room for the books that would be written.” (John 21:25 NIV).

Second, Ehrman indicates that John’s account is implausible because Jesus would have been arrested if he had pulled such a stunt early in his ministry.  Well, maybe…or maybe not.  Early in his ministry, the people and the authorities were still trying to “figure Jesus out.”  The crowds were divided about Jesus and the authorities were afraid to stir up additional trouble by arresting him.

Three years later, when Jesus did this the second time, the Jewish authorities had, by that time, had enough.  Jesus was, in their eyes, a threat to their authority that had to be stopped at all costs.  That’s one reason he didn’t get away with it the second time, and the Jewish leaders were far more willing to take action.

The point is, it’s entirely plausible that Jesus could have cleansed the temple twice.  Furthermore, it’s plausible that the gospel writers chose to emphasize the occurrence that best fit with the thematic structure of their accounts.  After all, John, writing in 85-90 A.D., would have certainly had access to the synoptic gospels (which were written 20-25 years earlier).  He would have known that they had related the later occurrence.  So, if he contradicted them, then he did it knowingly.  Most likely, he related the earlier event because it fit better with the way in which he organized his gospel.