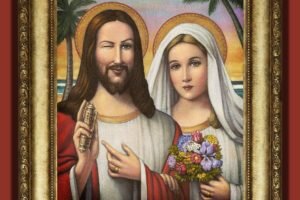 This article is about a topic that barely deserves to be addressed (but unfortunately needs to be):  The so-called Gospel of Jesus’ Wife.  For years, some anti-Christian conspiracy theorists have pushed the idea that Jesus was married, that the canonical gospels tell a fabricated story, and that the “truth” can be found in various “lost” gospels (such as the Gnostic “gospels”).  Well, let’s explore the real truth.

In September of 2012, Harvard Divinity School Professor Karen L. King announced the existence of a scrap of papyrus that had been dubbed The Gospel of Jesus’ Wife.  Supposedly, the document was a 4th century text in the Coptic language that had a very intriguing fragmentary line in it:

At the time of its release, Professor King made it clear that the text, even if genuine, offered no new or useful knowledge about Jesus.1

However, the public is not so well educated, and the media is always looking for a story to hype.  So, numerous media outlets published reports about this “ancient” document that promised to turn Christianity on its head.  Anti-Christian writers and bloggers also got in on the act.

I remember watching videos on YouTube that anti-Christian sources had produced about this “gospel,” some of which adopted a smug attitude, as if they were finally confronting Christians with real evidence to destroy their faith.  The only thing such videos showed was the ignorance and gullibility of those who produced them.  Here’s why…

First, even if it were a genuine 4th century text, the Gospel of Jesus’ Wife would simply be another Gnostic text that teaches weird things about Jesus.  The heretical Gnostic movement didn’t really come into its own until the 2nd through the 4th centuries, long after Jesus was crucified.  That movement produced a number of bizarre documents, including the pseudoepigraphal “gospels” of Thomas, Mary, Philip, and Judas.

Those documents were never included in the Biblical canon because the Church knew they were late, falsely attributed, inconsistent with known teachings of Jesus, and had absolutely no apostolic authority whatsoever.  They were not “suppressed” by the political leaders of the Church because of the embarrassing “truths” they contained about Jesus, contrary to Dan Brown’s The DaVinci Code and other entertaining conspiracy theories.  Rather, they were ignored because the Church knew they were fraudulent, just as scholars know it today.

Now, the points above would be enough to end the hyperventilating over this document even if it were a genuine, ancient Gnostic text.  But it’s not.  That’s right.  It’s a fake.  Shortly after it was released, New Testament scholar Francis Watson presented reasonably conclusive evidence that The Gospel of Jesus’ Wife was a modern forgery, that had been created by leveraging the Gnostic Gospel of Thomas.2

More recently, in its July/August 2016 issue, The Atlantic ran an article that sheds more light on the extremely shady provenance of The Gospel of Jesus’ Wife and the even shadier history of its owner, Walter Fritz.

As a result of the information that has come to light, Harvard Divinity School has posted an update on its own website.  It shares some quotes from Professor King, who states, “It appears now that all the material [owner Walter] Fritz gave to me concerning the provenance of the papyrus … were fabrications,” and that the Atlantic‘s investigation “tips the balance towards forgery.”

So, the next time someone smugly tells you about the “real gospels” and how Jesus hooked up with Mary Magdelene and had a pile of kids or something…Just smile, shake your head, and calmly tell them the truth.