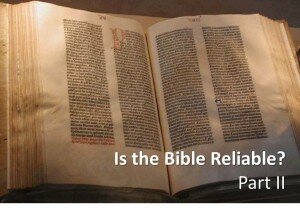 In Part I of this three-part series, we explored some of the external evidence supporting the Bible’s historical reliability.  However, being reliable does not make a book the inspired and inerrant Word of God.  To help demonstrate inerrancy, we now look at the internal evidence to see if the Bible displays the unique fingerprints of God’s influence.  And we find signs of his inspiration all throughout the Bible.

First, we can have a high degree of confidence that the Bible we have today accurately reflects the words and meanings of the original texts, even though the original writings have long since disappeared.  While the topic of textual criticism is much too deep to cover adequately in a few paragraphs, we can summarize the key points.

The job of transcribing Old Testament scriptures was of paramount importance to ancient scribes, with them painstakingly copying every word and sometimes even counting the letters in copies to ensure accuracy.  In addition, while we don’t have the original texts, we do have many fragments and copies dating from 600 BC to after 900 AD across different times, regions, cultures, and languages.  We can see that despite these factors, the texts are very similar with the vast majority of differences confined to spelling variations (equivalent to color vs. colour) and the inclusion/exclusion of conjugations, without changing the meaning of the text or any doctrines.

From a New Testament perspective, we have even more confidence.  We have many thousands of New Testament manuscripts and fragments, as well as biblical quotes from early church leaders.  These writings also have a very high degree of consistency.  The differences that do exist are again primarily in spelling and grammar and do not affect meaning or doctrine.  Additionally, the original texts were written within a generation of the events they describe, with the earliest existing fragment from within only a hundred years or so.  Historically speaking, this is a very short period of time.  Other great historical writings, which are not questioned, are much further removed from the events they record.  For example, the earliest copies we have of the works of Thucydides and Aristotle are over 1,000 years after the events they describe.  The earliest copies of the histories of Julius Caesar are over 900 years after his reign.  In each of those cases, we have 10 or fewer copies versus the thousands we have for the New Testament.

The Bible makes repeated internal claims to be a divinely inspired, inerrant book.  The Old Testament refers to itself as the “word of God” almost 400 times.  New Testament authors repeatedly refer to the Old Testament as Holy Scripture and quote from it.  They also claim their writings carry prophetic or scriptural authority (e.g. 1 Corinthians 14:37, 2 Peter 3:16).  Jesus affirms the Old Testament as scripture (e.g. Matthew 5:18) and often quotes from it.  Admittedly, the Bible’s claims about itself do not prove its inerrancy any more the claims of other holy books.  However, we must remember that the Bible is actually 66 books by at least 40 authors.  The fact that they vouch for the accuracy of each other’s work lends credibility that other books cannot claim.

Another internal evidence of the Bible being divinely inspired is the fact that despite 40+ authors writing over 1,500 years, the biblical narrative contains one consistent theme.  From Genesis to Revelation, we see the recurring theme of God’s love for mankind, our rebellion against him, his repeated forgiveness, and the restoration of the relationship.  This theme culminates in the permanent restoration offered through the prophesied Messiah, Jesus, and the future establishment of his kingdom.   The fact that this theme is so well maintained despite the passage of time, cultures, languages, and authors implies a common, divine source.

Without question, one of the most compelling internal evidences of the Bible’s divine inspiration is the quantity of specific, fulfilled prophecies.  Hundreds of such prophecies have been documented and many of them deal with the Messiah.  Throughout the Old Testament there are dozens of Messianic prophecies including that he would be from the line of David (Jeremiah 23:5), be born in Bethlehem (Micah 5:2), be preceded by another prophet (Isaiah 40:3, fulfilled with John the Baptist), would enter Jerusalem on a donkey (Zechariah 9:9), would be rejected by his own people (Psalm 118:22), would minister to the Gentiles (Isaiah 60:3), and be betrayed by a friend (Psalm 41:9).  Perhaps no other text has as many specific prophecies about the Messiah as Isaiah 52 and 53 which accurately predict, hundreds of years beforehand, that he would be wrongly accused, beaten, rejected, convicted and executed as a criminal, buried in a rich man’s tomb, and make intercession for others’ sin.  Such prophetic accuracy is clear evidence of a supernatural source.

Another startling prophecy about Jesus is found in Amos 8:9 which predicts, hundreds of years in advance, the midday darkness that occurred during his crucifixion.  This darkness is described in the gospels of Matthew, Mark, and Luke and is mentioned in non-biblical sources from the first century historian, Thallus (as quoted by Julius Africanus) and the second century Greek author, Phlegon.

In addition to the Messiah, there are many other fulfilled prophecies in the Old Testament.  Examples include the rise and fall of numerous nations and rulers including Tyre (Ezekiel 26), Babylon (Isaiah 13), and the Persian king Cyrus (Isaiah 44-45).  The book of Daniel accurately prophesizes the rise and fall, in succession, of the Babylonian, Medo-Persian, Greek, and Roman empires.  Accurate prophecies about Israel include the nation’s apostasy (Deuteronomy 31:14-18), their dispersion and 70-year captivity (Jeremiah 25:11-12), and the destruction of the Jewish temple (Matthew 24).

Most striking is the prophecy that Israel would eventually come back to its homeland and become a nation again (Ezekiel 37:21-22; Amos 9:14-15).  This unprecedented event occurred in 1948.  Throughout history, there is not even one other example of a nation that has experienced a similar level of persecution and foreign conquest as Israel, yet maintained their language, culture, religion, and ultimately, their national borders.

These examples are only a sampling of the hundreds of prophecies, made many years in advance, recorded in the Bible.  Each one points to a divine influence that not only reveals the future, but is actively involved in bringing it about.