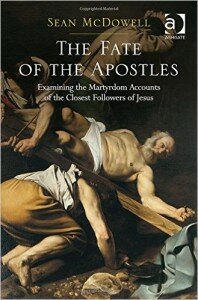 Any Christian case-maker will tell you that we should thank God for the hard lives and brutal deaths of the apostles.  Why?  Because they provide such a strong testimony for the truth of the gospels.  As the reasoning goes, the apostles were in a unique position:  They claimed to be first-hand witnesses of the resurrected Jesus, and they would have known if their claims were true or false.

Given their actions from the resurrection onward, they must have truly believed that they had personally witnessed the risen Jesus—and that he was the Messiah—or they never would have dedicated their lives to spreading the gospel at extreme personal risk and for no earthly gain.  Therefore, the lives and martyrdoms of the apostles provide a powerful collective testimony to the truth of the gospel.

All of this sounds reasonable, but is it correct?  Did the apostles actually engage in difficult missionary activities, spreading the gospel under the real threats of torture and death?  Did none of them ever recant their claims about Jesus? Did all of them ultimately meet violent ends at the hands of persecutors (except perhaps, for John, Son of Zebedee)?

Sean McDowell tackles all of these questions in his latest book, The Fate of the Apostles:  Examining the Martyrdom Accounts of the Closest Followers of Jesus (Ashgate Publishing Co., 265 pages).  I’ve been looking forward to getting my hands on this book for some time, but was held back by two things:  My own time constraints and the $120 price tag.

My time constraints I can explain, but the price tag I cannot.  To be clear:  I really liked the book…a lot…but I cannot understand why it was priced so highly.  My guess is that the publisher determined this book would generate interest among people in a relatively small—but highly motivated—market niche that would pay the price to have it.  I guess I’m in that market niche.  At any rate, let’s take a quick look at this interesting and useful work.

For starters, The Fate of the Apostles is systematically-written and well-organized.  McDowell starts off with a few introductory chapters that nicely set the context for the rest of the book.  Specifically, in these chapters, McDowell:

Following these initial chapters, McDowell then dives into the core of the book:  Fourteen chapters, one for each of the 12 apostles, and a chapter each for Paul and James (the brother of Jesus).  Those apostles for whom the historical cases are strongest, such as Peter, Paul, and James (the brother of Jesus) are covered first, while those for whom the sources are weakest are covered last.  For example, the last two apostles covered are Simon the Zealot and Matthias.

For each apostle, McDowell provides a well-written summary of the tradition (or traditions) regarding the apostle’s ministry, travels, and death.  For each tradition, he does an admirable job of providing a thorough (yet concise) overview of the sources behind it.

For some apostles, the sources are relatively strong, trustworthy, and non-contradictory.  For others, the sources are less robust and McDowell is often left having to leverage pseudonymous sources that are thought to contain significant amounts of legendary material, such as the Acts of Philip, The Martyrdom of Bartholomew, and the Acts of Andrew.  McDowell, of course, realizes the limitations of these types of sources, but asserts that they most likely contain a core of historical fact.  The challenge lies in separating the fact from fiction in these apocryphal works.

At the end of each chapter, McDowell sums up the evidence for the apostle in question, and then provides ratings for the historicity of the key elements of the apostle’s story.  Questions rated include

McDowell’s rating system includes a 10-point scale that ranges from not possibly true (certainly not historical, a score of 0-1) to the highest possible probability (nearly historically certain, a score of 9-10).

In his conclusion to the book, McDowell provides a handy table summarizing the relative level of historical certainties surrounding each apostle’s story.  He also tackles a few key objections that critics often express regarding the topic.

Overall, McDowell’s book makes a compelling case that, even though we have differing levels of confidence regarding the traditions surrounding the apostles, a few things are clear:

In conclusion, I thoroughly enjoyed this book and devoured it relatively quickly.  For me, it was fascinating to review such a concise—but thorough—study of all the different traditions and the sources behind them.  As someone who spent years in a management consulting firm, where well-organized, systematically written, and highly accessible deliverables were critical, I found this book to be right in line.  I’m certain that I will use it as a handy reference guide for years to come.  Well done, Professor McDowell.