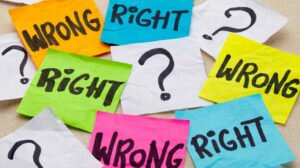 America is increasingly embracing “Moral Relativism.”  This philosophy is the belief that moral judgments are only true or false in relation to subjective standards like culture, tradition, or individual preference, and that no standard is inherently better than another.  This is contrasted to “Moral Absolutism” which contends that there are absolute, objective standards of morality and that certain actions are always right or wrong, regardless of the circumstances or context.

The Influence of Relativism

There is no doubt that moral relativism is the predominant view in the U.S.  A study by the Barna Group reports that American adults, by a 3 to 1 margin, feel that moral truth is relative to a person and their situation (64% agreeing vs. 22% disagreeing).  The difference is even more striking among younger Americans.  83% of American teenagers feel that moral truth depends on the circumstances with only 6% saying there are absolutes. Surprisingly, even self-described “born again” Christians agreed with moral relativism, with only 32% saying moral absolutes exist.  According to the Barna study, those accepting moral relativism most commonly used the standard of “whatever feels right or comfortable” in a given situation to decide right or wrong.

We can clearly see these statistics are true if we look at our society.  All around us, from an early age, we are taught that feelings are what really matter.  Countless TV shows teach us to just “follow your heart” when faced with tough decisions.  What used to be considered immoral and perverse is now celebrated and popular (e.g. the Fifty Shades of Grey series celebrates sado-masochism).  Even the Disney movie Frozen teaches kids to sing “No right, no wrong, no rules for me.  I’m free!”

There are several reasons that it is important for Christians to be knowledgeable about the philosophy and influence of moral relativism.  First, as mentioned above, it is the prevalent worldview of our society and of most Christians.  However, despite this fact, it is a logically self-defeating philosophy.  Finally, and most importantly, it is completely at odds with the teachings of Jesus and is therefore unacceptable to anyone that wants to truly follow Him.

Moral relativism is logically contradictory.  When a relativist makes the claim that “there are no absolute moral standards” they are making an absolute moral statement!  They are clearly contending that their position is right and if you disagree with it, you are wrong.  This is a powerful, but admittedly somewhat academic point.  In response, a relativist could say “Granted, there may be a few absolute moral truths, but the vast majority of decisions are made relative to your context, so as a practical matter, relativism rules the day.”  That brings us to a second point.

Even relativists don’t really believe their own philosophy.  They claim there are “no absolutes” regarding any number of social, economic, and religious issues, but at the same time they invariably have opinions on each of these topics.  And if you disagree with their position, you are wrong!  If you don’t accept all religions as equally valid, you’re close-minded.  If you view a particular behavior as immoral, you are judgmental.  What the relativist fails to realize is that in each case, they are making absolutist moral assumptions.  And when they classify those who disagree with them as close-minded or judgmental, they are making the implicit moral judgment that those qualities are bad.

If truly lived out, moral relativism eventually devolves into “might makes right” because whoever has the most power is free to impose their view of right and wrong.  But this is not the world most relativists expect or desire.  In fact, it is repugnant to them, and should be, because they value their personal freedom.  It is “right” and “good.”  But again, we are back to making morally absolute statements!

The relativist values “tolerance” and unknowingly elevates it to the level of an absolute moral good.  Being tolerant of others’ views is good.  Making moral or value judgments and being “intolerant” is bad.  Again, the relativist violates his/her own philosophy by making these assumptions.

Ironically, many relativists who claim to value tolerance can be extremely intolerant of those with whom they disagree.  When some relativists see the “intolerant” (i.e. absolutist) views of others, they resort to protesting, bullying, shouting at, and even attacking them to try and silence their perceived intolerance.  Hypocritically, their advocacy of tolerance really only applies to the views with which they agree.

It is most surprising that relativism is so prevalent among professing Christians.  There is no intellectually honest way to read the Bible and decide that God does not have clear moral standards for us.  Christians who claim to both follow Christ and relativism do not realize that their philosophy leaves no room for the God they profess.

The “Christian” form of relativism is often motivated by a mistaken view of love.  Love for others is a central and guiding principle of Christianity.  But the Christian relativist mis-defines love as an emotion that seeks to make others feel good and valued.  They believe that loving someone means accepting and condoning their behavior, at least as long as “they aren’t hurting someone else.”

However, love is actually an attitude that puts someone else’s needs ahead of your own.  While doing so can result in them feeling good, it also means being honest and loving someone enough to confront them when they have done wrong.  The Christian relativist misses this truth.  Even worse, by rejecting the moral absolutes of God, he or she effectively denies God’s authority to decide right and wrong.

Finally, the Christian relativist completely misses the fact that, by a relativistic standard, Jesus was quite intolerant.  Many people rightly focus on Jesus’ love and mercy.  But we can’t ignore that Jesus clearly taught moral absolutes.  He repeatedly condemned sin and told people to “go and sin no more.”  He commanded His followers to “be perfect, as your heavenly Father is perfect” (Matthew 5:48) and told them “if you love me, keep my commands” (John 14:15).  Jesus called the hypocritical religious leaders of His day a “brood of vipers” (Matthew 12:34) and “children of hell” (Matthew 23:15).  Jesus’ famed Sermon on the Mount is one of the most hard-hitting and convicting sermons on morality ever given.  And Jesus forever shuts the door on relativism when he proclaims “I am the way, the truth, and the life.  No one comes to the Father except through me” (John 14:6).  These are “intolerant,” absolutist statements.  But they were spoken by God, so they are true, whether the relativist believes them or not.

Why then do so many Christians accept moral relativism?  There are many likely reasons.  First, because our culture accepts relativism, Christians can unknowingly become influenced by it.  Secondly, Christians, though forgiven, are still sinners and subject to follow what they wish was true versus what God commands.  Finally, and unfortunately, some “Christians” simply aren’t Christian.  They attend church and go through the motions because it is a “nice idea” and makes them feel good.  But they don’t really believe it.  Perhaps unknowingly or unintentionally, they follow a relativist Jesus of their own making.  One that is all love and mercy without the unpleasant “intolerance” and judgment.

When viewing the evidence related on Logic & Light, a strong rational and historical case can be made for the truth of biblical Christianity.  If that is the case, then Christian absolutism must also be true.  However, absolutism is not without its own pitfalls.

First, the relativist’s position of “you can’t dictate what is right or wrong for me” is true.  We cannot dictate right or wrong for anyone.  Only God can do that.  God’s commands have been clearly communicated to mankind for thousands of years.  But the absolutist must make sure that he/she follows God’s commands and does not substitute his/her own standards.  If they do, they are making the same mistake as relativists.

Secondly, the existence of moral absolutes does not mean that all issues are absolute.  There are definitely areas of opinion or preference which God leaves up to the individual to decide.  All too often, Christian absolutists speak where God has been silent and create “sins” out of their own opinions and traditions.  Again, this is making the relativists’ mistake and replacing God’s standards with our own (e.g. Mark 7:8).  Paul, in Romans 14, even warns Christians not to argue over such “disputable matters.”

Finally, when an absolutist confronts immorality, it should be done gently and humbly (e.g. Galatians 6:1) with the intention of restoring someone’s relationship with God and not to tear them down, gloat, or be self-righteous.  Christians are often accused of, and all too often guilty of, this particular sin.  Christians must remember that we too are sinners and have broken God’s commands.  So correction must be done from the perspective of honoring God and preventing future transgressions, not belittling or judging others.

Moral relativism has become tightly woven into the fabric of modern culture.  However, it is a morally bankrupt, philosophically empty, and completely inaccurate worldview that denies the very core of Christianity.  The large number of people who claim to accept both Jesus and relativism need to carefully reexamine their views.  They ultimately must choose one or the other.  Unfortunately, many seem to have chosen relativism, which means the Jesus they accept is an impotent and inoffensive one, and not the one that can actually save them.