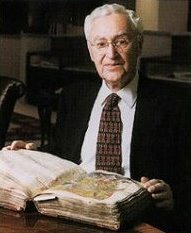 Bruce Metzger (1914-2007) was a New Testament scholar and textual critic, expert in Greek, and a longtime professor at Princeton Theological Seminary.  END_OF_DOCUMENT_TOKEN_TO_BE_REPLACED

The city of Carthage, now a suburb of Tunis in Tunisia, was the site of the Synod of Carthage in 397 A.D. It was a key city in the Roman Empire at the time.

A favorite charge brought by some “scholars” and atheists is that the New Testament is not reliable because it was assembled hundreds of years after the birth of Christianity at the third Synod of Carthage in 397 AD.   They further claim that by then, politics and power struggles had more to do with the selection of New Testament books than reliable theology.  As such, certain books were “deemed” Holy Scripture and other, more accurate books (e.g. the Gospel of Thomas) were cast away and banned.

Therefore, they assert, Christian practice and doctrine today look very different from the early church and from what Jesus intended.  This claim cuts to the very core of Christianity.  Does the New Testament accurately reflect Jesus’ teachings or is it merely a collection of the most politically expedient books that happened to “win out” at the time?  Let’s take a look. END_OF_DOCUMENT_TOKEN_TO_BE_REPLACED