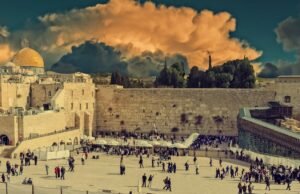 With the previous Cosmological and Teleological Arguments, we began building the foundation for a rational belief in God.  Then the Anthropological Argument began to narrow our focus from “a god” to the specific Judeo-Christian God.  We now continue building that case with the Covenantal Argument.

According to the Bible, God made several covenants (formal, binding contracts) with various people throughout history.  Two of these covenants deal specifically with the nation of Israel.  The Covenantal Argument examines the history of Israel to determine if it is consistent with these covenants.  In the end, we will see that not only does the Bible predict, centuries in advance, the pattern of Israel’s history, but that Israel’s experience is completely unique on the world stage.

The first covenant with Israel is summarized in Genesis 12:1-3 and is an unconditional promise made by God to Abraham.

“Now the Lord said to Abram, “Go from your country and your kindred and your father’s house to the land that I will show you. 2 And I will make of you a great nation, and I will bless you and make your name great, so that you will be a blessing. 3 I will bless those who bless you, and him who dishonors you I will curse, and in you all the families of the earth shall be blessed.”

Specific to the nation of Israel, we have two promises:  1) They will be a “great nation” and 2) All the families of the earth will be blessed through them.

The second covenant is found in Exodus 19:5-6 where God gives Moses His laws for Israel to follow.

5 Now therefore, if you will indeed obey my voice and keep my covenant, you shall be my treasured possession among all peoples, for all the earth is mine; 6 and you shall be to me a kingdom of priests and a holy nation.’ These are the words that you shall speak to the people of Israel.”

In essence, God promises Israel will be set apart and special within the world, similar to the “great nation” pledge made to Abraham.  However, unlike the Abrahamic covenant, this one is conditional.  As detailed in Leviticus 26 and Deuteronomy 28, God’s blessings are dependent on Israel’s obedience to His law.  Conversely, there are many curses tied to their disobedience.

The blessings for obedience include prosperity and victory over their enemies.  The curses for disobedience include famine, disease, defeat by their enemies, the destruction of their sanctuaries (Leviticus 26:31), captivity, and being scattered and persecuted throughout the world (e.g. Leviticus 26:33, Deuteronomy 28:64).  However, due to His earlier, unconditional promise to Abraham, God also promises to restore Israel upon their repentance (Leviticus 26:40-45).

In short, according to the Bible, God promises that Israel will be a 1) great nation that 2) brings blessing to the entire world, but will be accountable to God for their obedience.  Based on their obedience or disobedience, there will be 3) national rewards and punishments, but they will ultimately be 4) restored due to God’s promise to Abraham.  Incidentally, this ultimate restoration is also foretold in Isaiah 11:11-15 and Hosea 3:4.  But is Israel’s history consistent with these promises?

First, let’s note when these covenants and prophecies were recorded.  This is important to ensure that they were not written “after the fact” and simply made to sound like a prophecy.  According to tradition, the Torah (first five books of the Bible) were written by Moses, circa 1,400 BC.  Secular scholars, who view the Old Testament as little more than recorded Jewish oral history and mythology, place the Torah’s writing in approximately the 6th century BC.  So even with the most critical view, anything occurring after ~500BC that is consistent with the Torah’s predictions can be viewed as genuine prophecy.

Let’s review a summary of key events in Israel’s history1:

~1,400 BC.  Israel conquers and settles the “Promised Land,” though the nation largely exists as 12 separate tribes.  While scholars debate the actual timeframe, the Merneptah Stele from Egypt dates to ~1,200 BC and mentions Israel, so it clearly existed by that time.

~1,050 BC.  The nation of Israel unites under a single king and flourishes.

722 BC.  The Assyrian empire conquers Israel and exiles the survivors, but is unable to take Judah.

612 BC.  Babylon conquers Assyria.  Judah also becomes a subject kingdom in 606 BC.  Judah rebels and is ultimately destroyed.  Captives are taken to Babylon and the Jerusalem temple is destroyed.

537 BC.  The Persian empire defeats Babylon and allows the Jews to return. The temple is rebuilt.

332 BC.  Alexander the Great takes control and treats the Jews well. Jewish historian Josephus says this favorable treatment is because the Jews show Alexander a prophecy about him from the book of Daniel.  Alexander eventually dies and his empire is split among his four generals.  Judea goes to Seleucus.

~168 BC.  Seleucus’ descendent, Antiochus Epiphanes, tries to destroy Judaism and desecrates the Jerusalem temple.  Israel revolts and successfully wins freedom under the leadership of the Maccabees.

63 BC.  Rome takes over. Rome provides some religious freedom, but there is tension because of Rome’s polytheism.

~4-6 BC.  Jesus of Nazareth is born.  He is later (~30-33 AD) crucified under the Romans.  His followers claim He is resurrected 3 days later, starting what will become the world’s largest religion, Christianity.

66 AD.  The Jews revolt against Roman rule.  In 70 AD, the Romans put down the rebellion and destroy temple. Over 1M Jews are killed and many are sold into slavery.

638 AD.  Islam rises and the Arabs conquer Jerusalem.  Jews and Christians are killed or forced to live as 2nd class citizens.

1096-1291 AD.   The Crusades occur.  Jews are treated poorly by both the Christians and Muslims.  Many are killed in both Europe and the Middle East.

1930’s AD.  Nazism rises in Germany.  The persecution and extermination of Jews begins and Jewish migration to Palestine occurs.  WW2 begins in 1939.  An estimated 6M Jews are killed in the Holocaust.

Does this history follow the pattern foretold in the Torah?  Specifically, is Israel a 1) great nation that 2) brings blessing to the entire world, receives 3) national rewards and punishments, and is ultimately 4) restored?

From a numerical perspective, God clearly grants His promise to make Abraham “a great nation” as his descendants are estimated at ~15 million Jews today, with tens of millions more in previous generations.  On the other hand, Israel, at its peak, was never more than a regional power that didn’t really last that long as a stand-alone nation.

However, Israel still became one of, if not the, world’s most impactful nations of all time.  Israel created the world’s most widely read and influential book in the Bible, with approximately 4 billion copies sold.  Israel also gave the world its most famous and influential person with Jesus of Nazareth, who founded the world’s largest religion with 2.2 billion followers.  The world’s largest war was fought (partially) over the attempted eradication of the Jewish people.  And today, one of the most significant events in world politics is the Israeli/Arab conflict and the global terrorism that results from it.  This level of long-term political and cultural influence is characteristic of a “great nation” but is very hard to explain for an otherwise small, short-lived, regional power, apart from God’s covenants.

Blessing to the World

If Jesus of Nazareth is in fact the Messiah, who died to atone for the sins of the world, this promise is clearly fulfilled.  We have posted numerous articles arguing in favor of the historical veracity of Jesus’ divinity and atonement, and there is significant evidence to support both propositions.  At a minimum, even unbelievers, if they are objective, must admit that Jesus 1) came from the nation of Israel, 2) claimed to be the Messiah and is widely believed to be such, and 3) has had an unmatched worldwide influence for two millennia.  So even with just these minimal facts, we have support for God’s promise to Abraham.

Israel has clearly seen successes throughout its history such as the original taking of the “Promised Land,” the initial kingdom period, the rebuilding of the temple in 6th century, and the regaining of independence under the Maccabees.  However, by its own admission throughout the Old Testament, much of its history has been plagued by disobedience to and punishment from God.  Consequently, everything Leviticus and Deuteronomy foretell has come to pass in terms of Israel’s divine correction.

Israel has been conquered by foreign powers 47 times2 and “scattered among the nations” (by the Assyrians, Babylonians, Romans, and Nazis, among others) repeatedly.  They have been taken into captivity and slavery multiple times.  And, as Leviticus 26:31 states, their sanctuaries have been desolated, with the most historically significant being the temple destructions in 586 BC and 70 AD and the desecration of the temple by Antiochus Epiphanes in ~168 BC.

No other nation in all of history has experienced the persecution, dispersion, and conquering that the Jewish people have endured.  Israel has experienced dozens of invasions and withstood multiple global dispersions and attempted genocides by some of the most powerful nations on earth.  These trials are completely consistent with what was described in Leviticus and Deuteronomy.

Despite these challenges, Israel has always survived just as the Bible promises in Leviticus 26:40-45.  And, after ~1,900 years of not being a nation, Israel was reborn, as predicted by Isaiah and Hosea, in 1948.  This is the only time in all of history that a nation has faced this level and duration of persecution and dispersion and yet ultimately survived with its religion, language, culture, and borders intact.  What other group has endured 2,600+ years of attack and ~1,900 years of exile, slavery, and genocide and survived?  There simply isn’t anything else even remotely like Israel’s story in the rest of world history.

This restoration continues today as Israel, since its re-creation, has faced repeated attacks from its neighbors.  In numerous wars, including a 1948 war immediately after its formation, the Six Day War in 1967, and the Yom Kippur War in 1973, Israel has been outnumbered and outmatched and even caught by surprise, but has still come out victorious.  In fact, Israel has not just survived, it has thrived and has never been stronger than it is now, despite its history of persecution.  These facts are very hard to explain apart from God’s promises.

Interestingly, a review of the above timeline shows that the vast majority of these calamities and Israel’s eventual restoration come well after even the “late date” for the composition of the Torah (mid-6th century BC).  Even from a secular, unbelieving viewpoint, the Bible accurately predicts Israel’s historical pattern centuries ahead of time.

Israel’s story is fascinating.  Not only is it completely unique in world history, but it is entirely consistent with biblical prophecies and promises made centuries and even millennia before their fulfillment.  Israel’s story provides powerful support for the biblical God.  Not only does Israel reflect exactly what God promised in the Bible, but it does so in a completely unique manner, historically speaking.  Israel’s history is nothing short of miraculous.